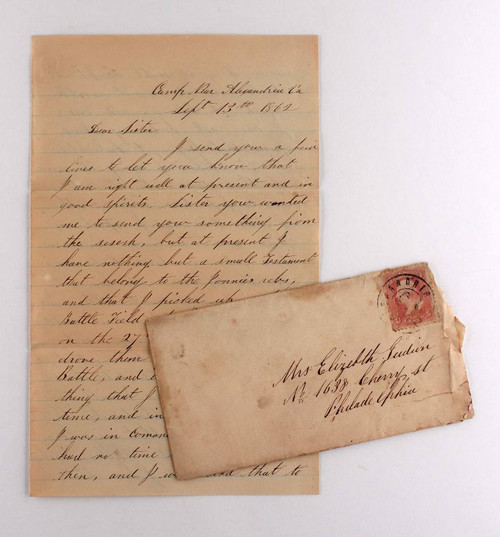 For sale is a letter written by Captain Benjamin D. Coley of the 6th New Jersey Infantry Regiment. Coley entered the Civil War as a 2nd Lieutenant in Company K before eventually moving up to Captain of Company I. This letter is addressed to his sister Elizabeth Gudgeon (sp?) on Cherry Street in Philadelphia, PA.


We received some letters from his descendants that tell the early story of Benjamin D. Coley's life in the Civil War where he started as a 2nd Lieutenant. We researched him and it's an amazing story of a man born in England that emigrated to Philadelphia as a young boy. He then worked for a businessman before eventually joining the war. He served with honor and distinction, eventually being promoted to Captain for his service. As a member of the New Jersey 4th and later 6th Regiments, he would have fought in both the First & Second Battles of Bull Run, the Peninsular Campaign, and many other famous battles until his medical discharge in March of 1864. You can search his name to see a photo of him and a story of his life after the war running a grocery business in Camden, NJ.

Letter Summary:
Benjamin writers to his sister Elizabeth again to update her on the war and how he can't fulfill her request to send her something from the war because all he has is a small bible he picked up off one of "Jonnie's rebs" during a battle on August 27, 1862. Based on his service with the Army of Potomac and writing from a camp in Alexandria in mid-September, this battle he refers to was most likely one of the small skirmishes that led up to the Second Battle of Bull Run on August 28th, 1862.

He continues to tell her he will send her something when he gets a chance and he expects to continue to camp 2 miles outside of Alexandria since he is back in a large officer's tent and is comfortable at camp. Despite these comforts, he tells his sister he wishes to return home as soon as possible and talks about some soldiers he knows that are being held prisoner or detained before a court-martial for deserting.

Condition: This letter is in excellent shape considering its age. The original envelope is included and was opened on the side. The letter is folded and has one small tears with no stains. The writing is not faded and is in great, visible condition. Please see photos as they are an extension of our written description.