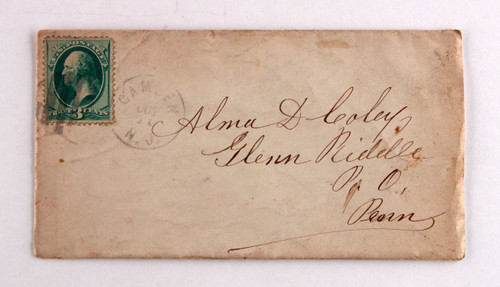 For sale is a letter written by Captain Benjamin D. Coley of the 6th New Jersey Infantry Regiment in General Hooker's Division during his post-war years. Coley entered the Civil War as a 2nd Lieutenant in Company K before eventually moving up to Captain of Company I. This letter is addressed to his daughter Alma Coley of Glenn Riddle, PA (small community located in Middletown Township in Delaware County, Pennsylvania, approximately 15 miles from Philadelphia).


We received some letters from his descendants that tell the early story of
Benjamin D. Coley's life in the Civil War where he started as a 2nd Lieutenant. We researched him and it's an amazing story of a man born in England that emigrated to Philadelphia as a young boy. He then worked for a businessman before eventually joining the war. He served with honor and distinction, eventually being promoted to Captain for his service. As a member of the New Jersey 4th and later 6th Regiments, he would have fought in both the First & Second Battles of Bull Run, the Peninsular Campaign, and many other famous battles until his medical discharge in March of 1864. You can search his name to see a photo of him and a story of his life after the war running a grocery business in Camden, NJ.

Benjamin writes to his daughter Alma Coley on January 2nd, 1865. In this short letter, Benjamin Coley writes in response to his daughter's previous letter about her being "promoted to another room" and instructs her to be good for her mother. He also tells her to remind her brother Benny that he would have received a sled for Christmas if he was home. He instructs her again that they should be good for their mother and he will see them when he comes home. According to our research, Captain Coley was discharged from the military and was operating a grocery business in Camden, NJ. We are unsure why he did not spend Christmas with his daughter Alma or son Benjamin. His other daughter Martha is not mentioned. Perhaps they were living with family in Pennsylvania?

Condition: This letter is in excellent shape considering its age. The letter is folded with slight staining, but the ink/pencil is very clear and not too faded. Please see photos as they are an extension of our written description.