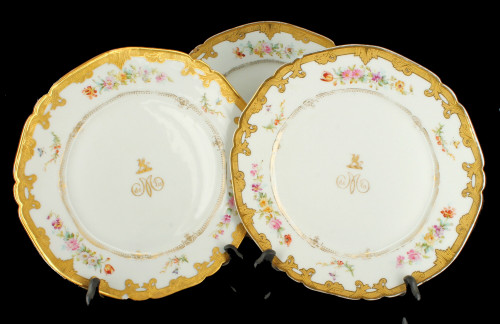 Offered here is a set of three high end French Sevres cabinet plates. Each plate shows hand painted floral motifs and tiny winged insects and butterflies. An elegantly detailed rim is quite remarkable and unlike most gilt edges that we’ve seen on French pieces such as these. Another unusual feature is the central monogram on each plate which reads “de la” inside of a highly stylized “M” character. Above the monogram is a winged Griffon which is a legendary creature that is part lion and part eagle. Griffons generally depicted both power and intelligence and were widely used by many cultures throughout antiquity.

Fair to good condition! One plate has two chips around the outer rim. The second plate has three chips that were filled with black paste and a hairline crack. The third plate has a single small chip on a portion of the outer rim. No crazing. Some scratches on each. Quite luxurious looking items. Still desirable as it is authentic Sevres, France!

Marked with a blue Sevres symbol and the letters M and D along with a retail mark in black that reads “A La Paix, 34th Avenue de L’Opera, Paris” A La Paix was a high end retailer with the height of its operations around 1891 to the 1920s.