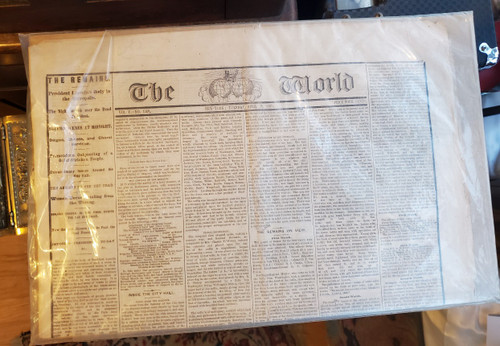 For sale is an antique The World newspaper published in New York on April 25, 1865. This newspaper is intact and is complete with 8 pages detailing President Abraham Lincoln's funeral procession through New York City after his assassination. The paper has articles about guarding of the president's remains due to remaining strife as the Civil War ended. At the publishing of this newspaper, John Wilkes Booth had still not been found. He was found a day later and was shot during attempted capture on April 26, 1865.

The World was began publishing in 1860 and was a widely read newspaper during the Civil War Years. When Joseph Pulitzer bought the newspaper in 1883, it would go down in history for the circulation wars with William Randolph Hearst and his New York Journal-American publication. The sensationalism of that era led to the term "yellow journalism" which is still taught in history classes today.


Condition: This item is in antique, pre-owned condition. We have left the newspaper folded neatly in a plastic sleeve with cardboard to keep it sturdy. We have not removed it from the plastic since and have kept it as it is to preserve this artifact. There is some wear to the edges and some small tears in the paper. All in all it is in great condition considering the age of the item.  Please see photos as an extension of our written description.