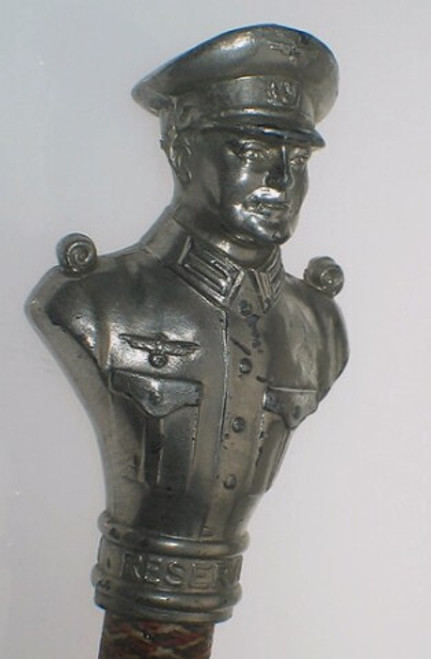 Featured here is a VERY  RARE German Officer's Silver Cane which was taken off an officer as looted booty during World War II.

This is how we speculate that this item ended up in the U.S.; as it was common to take personal possessions off of slain enemies.

This looted relic is very rare and authentic. From a South Jersey estate.

Canes shaft is made of a shellac waxed woven thread consisting of red, black, orange and yellowed white strands covering a wooden

core with a metal tip. The Pommel has a silver finish on the cast Officer Figure. The band below the officer reads "Reserve Hat Ruh"

translating roughly to "Reserve is Peace/Silence";which was a common motto for German Soldiers. "Reserve hat Ruh"

is also the title of a WWII German Wehrmacht Marching Song.

Cane is in very good condition with minimal areas where silver finish is worn on Pommel. Canes stick has minimal darkened areas

Note: We do not condone these kinds of articles that promote hate of any kind.