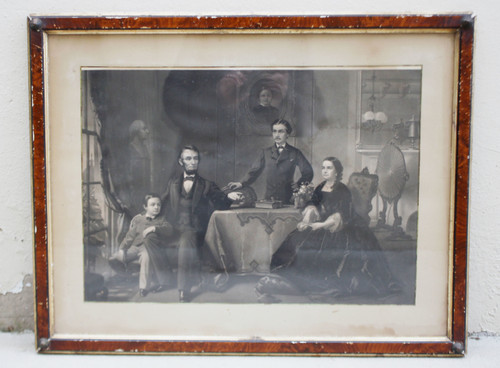 We are offering 1866 Steel engraving by William Sartain after Samuel B. Waugh painting showing, "Lincoln and His Family."Published by Bradley & Co.

Image only has a small amount of the top border.

Most famous of Lincoln family portraits which portrays the family inside the White House. Engraving is in good condition , some foxing  .  See pictures. The frame has a hand painted wood grain finish. The frame is still tight and secure however shows  specs of finish loss.  Easily touched up with a marker if you so desire.   Image only has a small amount of the top border showng. Engraving has been cut to fit the frame, or the rest is under the mat. We did not take it apart to look. The mat has age related discoloration.  See pictures.

Strong impression. Note: please ignore glare from the camera on the glass!

Information from the web:

"This is one of most famous prints of Lincoln, a family portrait based on a painting of Samuel B. Waugh and engraved by William Sartain. This print was copied by
many other nineteenth century print publishers, but none equaled the quality of this rich engraving. Lincoln is shown with his two sons and wife surrounded by
elegant furnishings of the White House. The family is grouped around a covered table, upon which lie two books, including the Bible. Lincoln and Tad sit to the left,
and above Lincoln’s right shoulder is a bust of George Washington, linking the martyred president with the ‘father of the nation.’ Outside the draped window is the
outline of the Capitol dome, completed during Lincoln’s terms. Mary Lincoln sits to the right, and Robert stands in the center between his parents. Over Robert’s
shoulder is a portrait of William Lincoln, who had died in 1862. Waugh makes use of clever symbolic lighting and artifacts, which was characteristic of portrait
painting at this time. One symbol was described in a promotional circular, “On the table is a vase of flowers ’embracing the Roses of the North, and the Small
Magnolia, Sweet Clematis, and Virginia Creeper, which bloom in profusion in the South,’ all wreathed in harmony, emblematic of the friendly feeling that should
exist between the people of the North and South, in the great vase of the UNION…”

Waugh’s details are beautifully rendered by William Sartain, scion of the illustrious Philadelphia family of artists the patriarch of which was John Sartain. The
concept and design of Waugh’s painting was based on Edward Savage’s famous image of George Washington and his family. It is interesting that John Sartain
engraved a large mezzotint after the Washington family painting, so here William is following closely in his father’s footsteps with his engraving of the Lincoln family.
William was able to closely simulate the texture of the rich satins, soft woolens, and lustrous leather. At the time of its issue, this print was thought of as a first class
example of print making, selling for as much as $20 for an artist’s proof, and $7.25 for a regular print. As Holzer, et al. remark, “In its day, the Sartain engraving
was considered the best print portrait of the Lincoln family.” (The Lincoln Image, p. 171) This print was so popular that cartes-de-visite were published using
photographs of the print, giving the illusion they were photographs of the actual family."