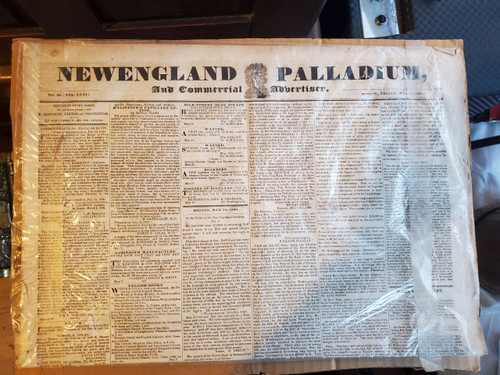 For sale is an antique New England Palladium newspaper published in Boston, Massachusetts on May 14, 1830. This newspaper is intact and has plenty of advertisements on the front page above the fold and includes references to Daniel Webster, a "Free Negro Colony in Canada", and more during Andrew Jackson's Presidency. America was still expanding and this item pre-dates the Mexican-American War (meaning that Texas and California were still part of Mexico).

The New England Palladium was a mainstay in Boston publishing for the first half of the 19th century. It was in print until 1840.


Condition: This item is in antique, pre-owned condition. We have left the newspaper folded neatly in a plastic sleeve and taped to a cardboard to keep it sturdy. We have not removed it from the plastic since and have kept it as it is to preserve this artifact. All in all it is in great condition considering the age of the item.  Please see photos as an extension of our written description.